I thankfully have had pretty amazing energy the last couple of days, so I thought I would actually make some food instead of the catch as catch can kind of meals that have been happening around here lately. I will share what works for me.

I had been part of a freezer exchange group for several months, but it kind of fell apart. About a dozen people would make 12 of the same meal and then exchange it for 12 different ones. I was ok that the group dissolved though since I (and some other members) would work really hard on preparing healthful homemade generous meals and we would receive in exchange (from a few people) white pasta and store bought sauce with very little meat. I guess we are kind of food snobs around here because I would have to revamp the meal so my children would eat it. This kind of defeats the purpose of the exchange group.
Another time my mom and I spent an entire day cooking 10 different meals. We trebled the recipes and I took two and she took one. That worked pretty well, but it was an exhausting day and it was hard to juggle the children and the cooking even with both of us there. It is also hard to find an entire day that works for both of us. Another drawback is that it’s expensive to buy all of the ingredients for 30 meals at one time, even without counting the cost of the homegrown beef in our freezer.
What has always worked best for me is to double or treble a recipe that I am already making. We eat one meal –and usually have leftovers–and I put another one or two in the freezer. Then on a low energy or sick or busy day, I can pull a freezer meal out and have a healthful homemade meal, regardless of the day’s circumstances.
Last night I got organized and made a list of meals I would like to make over the next month. 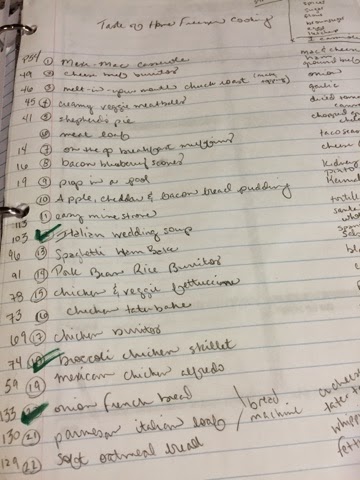 I started on a homeschool blog of a mom with seven children, but then realized I would be clicking all over the Internet and it was likely going to take all night to see if the recipes would fit our family’s taste. Plus most of the recipes are for chicken, and we eat a lot of home raised beef and pork.
I then pulled out my favorite publisher’s freezer magazine, which is a special publication they put out in the fall, and it only took me a short while to make the list. I made the grocery list at the same time, even though I probably wouldn’t buy everything at once. 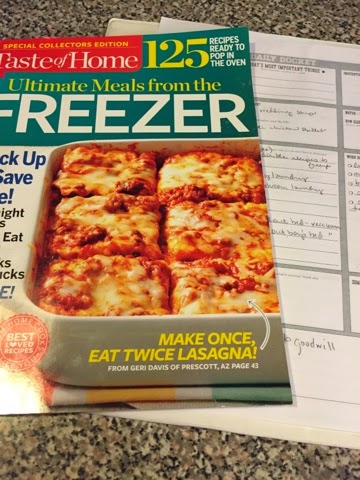 I was watching a friend’s daughters today, which really makes things easier because the kiddlets run off and play and don’t torment me about how they are so hungry.
Whenever I am working in the kitchen, it makes people hungrier than hobbits.
We had Chicken Broccoli Skillet for lunch. It was pretty good, even though I forgot the cheese, and I got two meals in the freezer with very little extra effort. 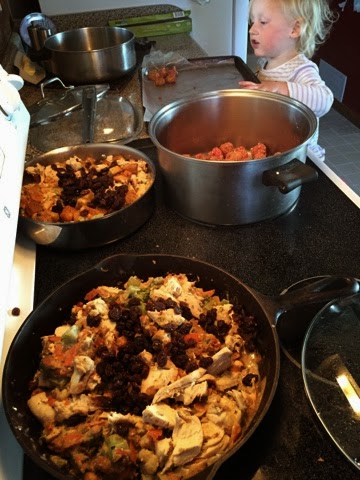 Then for dinner (supper if you’re from a farm in Iowa), since it has been bitter and blustery, I thought Italian Wedding Soup sounded good. I didn’t account for all the kajillions of tiny meatballs. Or the fact that my helpers would want to make meat snowmen. Or that once their friends went home, my Hungry Offspring would be whiny and tearful and prone to accidents. 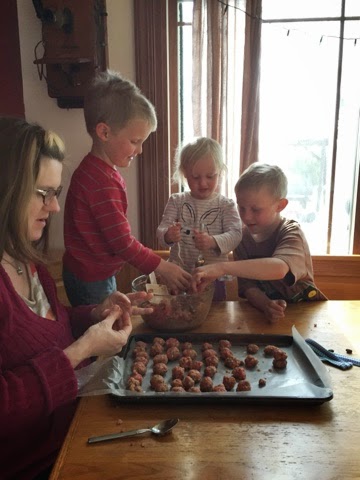 I managed to get dinner made, and some extra meatballs, but making the other batches of soup will have to wait until another day, as that was far too ambitious for this pregnant mama. 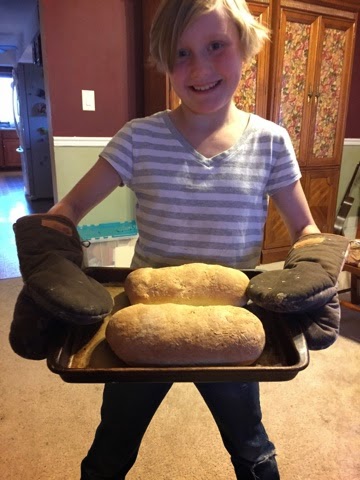 My precious eight year old who happens to be in possession of boundless energy made the Onion French Bread and as an added bonus, made some orange sherbet.
Please follow and like us: